Last week Jon and I had the pleasure of spending the day in Cambridge with our friend Sam Aaron, who is going to be one of our fantastic line up of speakers this October at XT16. He'll also be performing at the event.

Sam is a programming musician and performer who, (according to Rolling Stone Magazine) "transcends the present". He's the author and maintainer of Sonic Pi, a live coding synth.

Over lunch we chatted with Sam about performing, coding and design.

Getting away from the desk

One of the themes at XT16 this October will be how we can tap into our natural innovation and creativity to solve problems.

"If you want to find your creativity, the worse thing you can do is sit all day at a desk."

Personally I can relate to that. I find that some of my more difficult programming projects feel like hopping from one seemingly intractable problem to another. Usually the insight which leads to progress will not come to me while I'm at my desk but rather in the shower, in the pub or on my bike.

"I carry around a notebook with me everywhere, and make extensive notes especially during practice sessions. Often the ideas aren’t that great after some reflection. However most of the key features in Sonic Pi started their lives as an entry in the notebook.”

While Sam spends most of his time in Ruby, his knowledge and experience with Clojure has keenly influenced his work with Sonic Pi.

"I am re-creating core aspects of Clojure in Ruby, from immutable data structures to promises and atoms. The reason Clojure works so well is down to its design: all its features beautifully dove-tail into each other to produce something that is very powerful. You don't get that without spending a lot of time and effort thinking, which Rich (Clojure's language designer) obviously has." 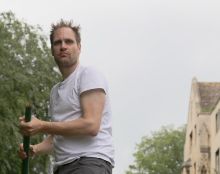 Sam had an interesting take on design. Sonic Pi is used in primary schools to inspire children to learn to program through music.

"I don't consider a feature complete unless it passes my 10-year-old test. If a 10 year old can understand and use it, it's good enough for inclusion"

That's a very tough ask. It means thinking about the accessibility of everything.

"If a feature passes my 10-year-old test, then it's more likely that it will also work well in a nightclub at 2am in the morning after a couple of beers due to its simplicity".

Sam is currently looking for a small amount of sponsorship to help fund his fantasitc work with Sonic Pi.

"That was badass!" – Rich Hickey, after one of Sam Aaron's performances.

If you work for a company that wish to sponsor Sam's amazing work with Sonic Pi, do get in touch and we'll gladly put you in touch.

We're really looking forward to seeing Sam again, and hear his talk at XT16 this October. Tickets are on sale now.